Passover started tonight. Since most Israeli Jews celebrate it with their loved ones, our government decided to block passage on all roads throughout the country, as of last night. The concern is that this will cause another outburst of Corona.

The shut down raises up questions, mostly for the Orthodox community. Due to the new regulations they are not allowed to perform many of their Passover rituals: Hag-Aa-Lah (a process of making utensils and dishes kosher and pure by immersing them in boiling water in the synagogue’s court); Bi-Oor Cha-Metz (the burning of unleavened bread); immersing in the Mikveh; praying at the wailing wall, etc.

Many such rituals have been ruled by the Rabbis since the destruction of the Temple in 70 AD. With no ability to sacrifice and shed blood, the nation needed a way of cleansing and purification.

On top of that, they cannot meet together, not even the minimal required number of 10 to form the Minyan (quorum), that enables them to say certain prayers.

The Rabbis have taught for centuries that prayer and study of the writings of the Sages is what preserves our nation, protects us, cleanses us. Now they find themselves at a strange junction, forced by circumstances. The majority of corona infected patients in Israel are from the Orthodox community, mostly because of their crowded lifestyle and struggle to adhere to the new regulations.

One example: every year, on the morning of Passover eve, they collect the unleavened products they still have at home and burn them in a special community waste bin. Actually, they ensure their homes are rid of any leaven a few days earlier, and they leave a few crumbs in a hidden place in order to perform a ceremony. The crumbs are collected on Passover morning, taken to the bin, and burned by a special man, appointed for the task. But this year it was forbidden, so the Rabbis declared that the crumbs can be flushed down the toilet.

I like this solution, but that raises up new questions. If this solution works, than who needs the complicated and expensive provisions they declared as necessary all these years? 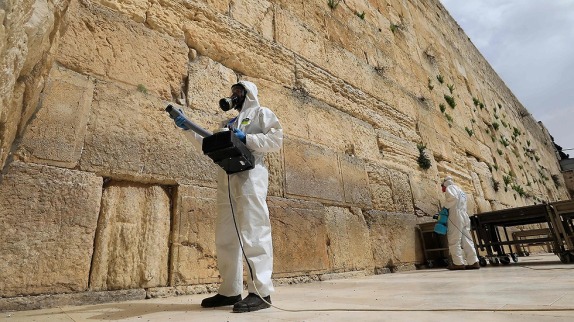 They are spraying the Western Wall, The center of Jewish prayers for centuries. If prayer is indeed the mean to achieve cleansing, than no spraying should be needed here. This should be the safest place on earth these days. And yet…

A few decades before the Temple was destroyed God had provided a solution, His ultimate mean of cleansing. But the majority among the Jews could not see it because of a severe punishment Israel was under back than, and is still under. It is called “Hidden Faces” (see Faces or a Mask? (A Midrash for Shavu’ot)

The neighborhood I live in, in the center of Jerusalem, has many community synagogues. They are all shut and inactive. I see some of their regular members walking around, keeping distance from one another, longing to go back to routine. And it stirs up in me a prayer that I never really prayed for them:

Abba, what an amazing plan you got into action when you sent your son as our Passover Lamb. You have granted me such a measure of grace when you chose to reveal Him to me as my Jewish savior; when you softened my heart so that I could bring Him into my heart, into my home. I am praying for the same grace over the Orthodox community.

I am not asking that you will help the observant Jewish community find peace where they are disturbed and restless. On the contrary, I am asking that you will use this unique time to stir within them a deep awareness, a sobering understanding that there must be a different mean of cleansing than those they relied on all these years. If the Western Wall needs to be cleansed and the other rituals can be replaced by simpler actions, than shake some of their foundations, and cause them to lift their eyes higher, above the rulings of their Rabbis, and to seek the God that does not change His mind and does not depend on circumstances. I ask it in the name of The Lamb, who paid the price in full.

9 thoughts on “Orthodox Jews and the Corona Passover”