In the past three days many places across Israel have been burning. Literally! Whole neighborhoods and villages are evacuated. Dozens of thousands of people are required to leave their homes, and some of them, when the fire ceases, find out they have nowhere to go back to.

Yesterday the fires consumed houses in Zichron Yaacov (a gem located near the coast) and Latrun. Today the fire fighters have been fighting dozens of fires in the north and center. The number of individual fires started yesterday alone amounts to over 220 (yes, two hundred and twenty!).

Thank God, so far there has been no loss of life – please pray that this will stay the case!

The pictures bellow were taken by my niece, from her home in Yad Hashmona, located just a few miles outside Jerusalem. 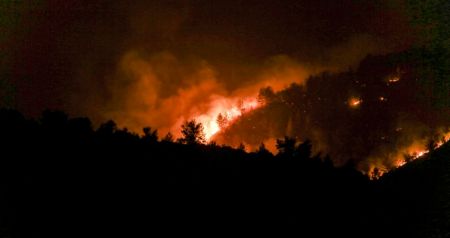 At this point it is almost certain that these, at least most of them, are a new form of terror. That, coupled with the extreme dry conditions and strong winds blowing since the day before yesterday, cause the fires to spread. The weather forecast tells that these winds will continue for at least two or three more days, so this attack could go on and cause a horrific damage throughout the country.

The picture bellow shows a fire starting device found by the border patrol up in the north. This wave of fires has been already dubbed the Fire Intifada.

Please pray for protection of the residents in the burning areas, Jews, Arabs, Druze and other minorities. So far, praise God, there has been not bodily harm or loss of life. Let’s pray that will continue to be the case!

Above all pray that God will use this to touch the hearts of those involved – those who had to evacuate and leave all their belongings behind, those who lost everything they had to the fires, and those who came to their rescue. That He would touch their hearts and cause them to turn to lean on the strength He alone can offer them.

May He pour out rain from above – this land is in dire need of rain regardless of the fires, so how much more now! May He stretch out His hedge of protection and keep us safe from this wave of fires – whatever their cause may be!