It’s 3 am in the morning. The Shamash (acting manager) of the synagogue walks around the neighborhood, knocking on the tin windows of various homes with his cane, waking up the sleeping residents to rush them to the tiny synagogue, so they can say their “Selichot”.

“Selichot! Selichot!”, he exclaims with a heavy accent, as he calls them to these special prayers, said each morning throughout the month of Elul.

These are the opening words of an amusing act of the Israeli musical “Bustan Sepharadi”.* The play shows the life in a Sephardic neighborhood in Jerusalem, during the 1930s. This is the same neighborhood I moved to just a few weeks ago (more on that – maybe – in a future series of posts about life in this colorful neighborhood).

“O, Mordechai, rise up and come to the synagogue, come on now. Man, his stomach must still be bloated from the food he ate last night… Rabi Surnaga, wake up, rise up as a lion to do your Maker’s will.

“Selichot! Senior Yehoshua! Open your eye, for all it takes is one moment and you can be gone. For we are all but vapor, with a noose over our head! Rabi Kastel, respectfully I ask you to rise, Selichot!”

The old version of the musical, for those of you who can enjoy the Hebrew.
The Selichot act is from 11:25 to 16:46

The tradition has not ceased. Even today, in the early morning hours, the observant residents of this neighborhood arrive to either of the old synagogues scattered all around, place their prayer books on the little stands, and make ready their Shofars.

The daily view from my window this month, as men gather
at the synagogue right next door to pray and sing their “Selichot”

“Selichot” is a general name for the liturgy that focuses on the goodness of God, who forgives His creation for their sins. Thousands of poems and odes have been written over the centuries, with the intent of awakening hearts unto repentance. Many of the poems have long been forgotten. Others have been granted more modern compositions, and time and again invoke sacred solemnity in the listener, stirring a longing to our original destiny as a nation, perhaps even a regret for our spiritual poverty.

One of these poems is called, Ben Adam:

Son of Man! Why do you slumber?
Arise and call out in supplication;
Pour out words of prayer;
Seek forgiveness from the Master of Masters.
Wash and purify yourself;
Do not delay before the days depart.

The poem is designed to address the sinner whose conscience slumbers, and remind him or her of the story of Jonah. In the midst of the storm, the captain of the ship found the prophet soundly asleep below deck, and cried out to him in what combines complaint with deep disappointment, born out of Jonah’s ability to ignore the great disaster that has come upon the ship (Jonah 1:6).

The most famous of these liturgical prayer is “Adon Haselichot” (Master of forgiveness).

Master of Forgiveness, Examiner of hearts,
Revealer of depths, Speaker of justice…
We have sinned before You; have mercy upon us!

You perform salvations, You see future events,
You call the future generations,
You ride in the highest heavens.
You hear our prayers, perfect in knowledge…
We have sinned before You; have mercy upon us!

“Master of forgiveness – we have sinned before you, have mercy upon us” – the prayer rises up from the open windows, and at times wakes me up. At the culmination of the prayer, the Shofar is blown loudly.

But not only in this neighborhood. Everywhere in the world, observant Jews cry out wholeheartedly this month, seeking God’s pardon of their sins. The common belief is that the gates of heaven, that are locked during the year, cannot stay indifferent to an entire nation asking permission to enter in.

Master and Lord, the Lord who forgives, we know that You see and hear and know. Multitudes are asking this month that you forgive and atone their sins, not realizing You have already answered this prayer. Hundreds of years ago. So sad.

Abba, we also know that You desire to reveal to them this aspect of your face, the face of Your Son who paid the full price for each sin they lay before you with a tortured conscience. Draw them after you please, lead them into the banquet hall, and cover them with Yeshua’s banner of love and blood.

Forgiving, not just being forgiven

Judaism in general is not very strong when it comes to forgiveness. We lack the understanding that the New Testament carries. Yeshua taught forgiveness in a way that was uncommon to the culture back then, and today as well. He taught that forgiveness is not only something God does, but that we need to do it ourselves, or else God will be angry with us and even go as far as handing us over to the hands of tormentors (Matt. 18: 32-34).

I want to share with you some examples of the power that forgiveness carries. Stories I witnessed myself. These are testimonies of some of the participants of our Tabernacle Seminars for English speakers. Here is on of them.

Ieva’s Walk Through the Tabernacle

Ieva, a beautiful Latvian girl who lives in Paris, joined our February 2019 Seminar, planning to work on her fears. 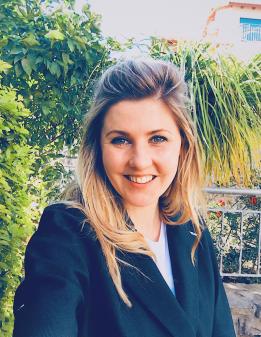 She was so ready to do what we call “Spring Cleaning” of her heart, and to invite Yeshua to be the master of specific areas of her life. Later she shared that even though she has been a follower of Yeshua for many years, she never fully submitted various parts of her soul to Him. So at the beginning of the Seminar she invited Him into her ambitions, expectations, plans, dreams, her past, various relationships, her feelings – especially the feeling that she is not good enough, and of course into her fears and anxiety attacks.

As she was doing it in details, she was surprised to realize the depth of the unforgiveness she carried in her heart. When we taught the five practical steps of forgiveness and the liberation it brings, she embraced it. Ieva describes it as “the best part of the Seminar”, mostly because she realized that no matter what will happen or what will hurt her, she can always apply these steps and handle it. “For me this was life changing”, she explains. 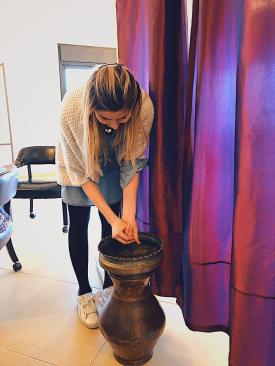 Ieva washing her hands at the Laver, as a symbol of her
agreement with what she just learned about fear in the Word of God

After focusing on this for a few days at the Bronze Altar, Ieva was ready for the Laver. There she studied what the Bible teaches regarding fear. As she was doing that, she was practically washing her understanding. At one point in this process she broke down, realizing how big is the gap between her own perception and what God says about fear. But this was also a Holy Spirit moment for her, as God used it to move her from the Outer Court behind the Curtain, and into the Holy Place.

Ieva stood by the Lampstand and allowed the Holy Spirit to shed His light into her darkness and expose a major lie. She realized that deep inside, she believed that “God is good to others, but not to me”. That was a sobering moment, a painful one, yet a good one, as it led her to repent and to move on to the Table of Shewbread, where she looked for a specific verse that will overthrow that lie.

Psalm 23:6 turned into her nourishing loaf: “Surely your goodness and love will follow me all the days of my life, and I will dwell in the house of the Lord forever.” Ieva’s innermost being was so hungry for this truth, to own it, to let it be her sword when fears pop up again.

When the Seminar ended, all these steps became a part of her daily routine. “I love the simplicity of it and the fact that I don’t need to find the time or be in a good place spiritually to apply it. I can apply it wherever I find myself or however I feel – I just invite Yeshua into the details of the situation and declare Him the Lord. And He immediately takes care of it”, she says.

The change in Ieva is evident enough for people around her to comment on the peace and joy she carries, and that were not there before.

I will share a few more stories in my next post. In the meantime, I wish you all a Good Jewish New Year, and a clear conscious before the Master of Selichot.

* Bustan Sepharadi means a “Sepharadic Orchard”. The musical was written by Yizhak Navon, the fifth president of Israel.

What is causing you so much pain, tormenting you and pushing your buttons, so to speak? We all have our battlegrounds – problems, sins or bad habits we seem to never get rid of. For a while we may manage to defeat or control them, but then they rear up their ugly heads all over again. The root is still there.

Over the years we have developed a special and powerful course, designed to help the believer live life in a manner in which God’s glory replaces the shame, the guilt and the fear – a tool that is designed exactly for this purpose of gaining victory over these battlegrounds. This course is based on the pattern of the Tabernacle built by Moses.

For years this teaching was only available fully in Hebrew, but these past couple of years we have developed an English program, taught over a span of 10 intensive, yet liberating days. Our next course will be held in March of 2020 (the 22nd-31st). Registration is now open. If you are interested in more details, please contact us at otoomofet@gmail.com

To read more about our previous course offered last year and some of the testimonies, click here. 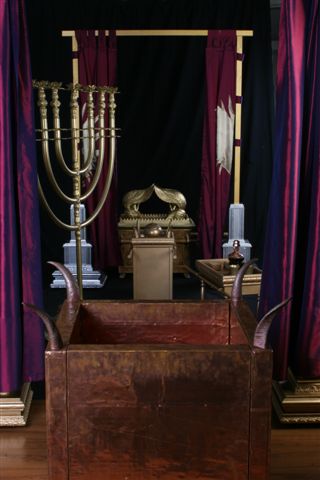 The half scaled model of the Tabernacle we use as we teach about each of the furnishings and tools found in it and how they apply to us today.