“You look like a Ruth!” Hermana shouted through her car’s open window to her Jordanian friend, who stood at the King Hussein crossing point with a sheaf of white wheat.

Priscilla threw her gorgeous black curls back and laughed heartily, stating, “Your discernment is accurate. If only you knew why I was here.” Hermana’s comment had struck a chord, as Priscilla has been spending hours in the story of Ruth and Naomi, yearning to see a modern version of this co-operation.

She was born in Jordan and was taught by her father from a young age to pray for the peace of Jerusalem and bless the family of Abraham. Her heart was always full with love for the Hebrew nation, so she wanted the nations to realize that the Hebrew family is a part of theirs. Priscilla believes that Israel needs to see Jordan and the Arab peoples as family, and that we cannot be restored without each other’s help. But for now, she crossed the Rift in prayer for her people’s part.

Unknown to us at that point, the crossing over, the Hebrewism which I spoke of in my previous post, started that day, when Hermana picked her up. 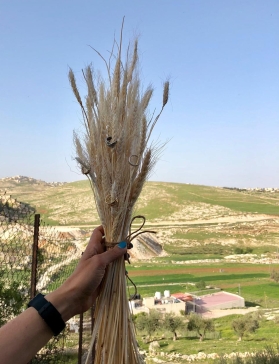 That visit to Israel (on March) was brief. Her goal: to wave sheaves of wheat over the fields of  Beit Lehem and pray for the old bread to be replaced with a fresh one

Hermana gave her a copy of my book – “His Faces” [see “His Faces” ]. I wrote it to recruit gentiles to their position as a modern Ruth on behalf of the modern Naomi, as she is making her way back to the House of Bread and to a renewed relationship with her Redeemer.

Hermana with her constant big smile

Priscilla read a portion of the book, and knew we must meet before she leaves. A couple of days later we met. Sitting across the table from her felt like talking to my spiritual mirror. This was my first impression after spending a long morning with her. Some of the vocabulary and imagery she uses when speaking about God’s Kingdom is pretty similar to the one He uses with me – the Tabernacle, Ruth, Naomi, Altar, Table of Shewbread…

I was surprised and humbled when I heard some of the insights she gleaned from the book of Ruth. I thought I knew it so well, but listening to her made me realize I only understood Naomi’s side of the story. My Zionist bones are so full of sympathy towards Naomi’s exile and I have gained much understanding of her sorrow, estrangement from God, her bitterness and widowhood. However Priscilla brought a new angle to the table. She explained Ruth’s heart, the heart of a “foreign” daughter who is eager to serve her Israelite mother-in-law (even to the point of allowing her to “use” her womb) and feel welcomed in the House of Bread.

It only then occurred to me that had Ruth lived today, she would be a Jordanian. She would even look like Priscilla. Writing it now embarrasses me a bit, but up to that morning in the restaurant I never thought of the Arab Ruths. Whenever I talked or shared about her, she was always a Westerner.

Back to Our First Meeting in the Restaurant

When we started speaking about travelling to Jordan together, Priscilla could already envision how that could create a platform for healing – not only at a personal level but also between the two people groups. But I was still in the “Marah” mode, focusing on the symbolic healing I wanted to carry on behalf of my wounded nation, by going into “exile” and journeying back. I could not even see how Jordan would benefit from that.

Priscilla wanted a few more prophetic sisters to join us. I didn’t care how many Ruths will be there to hold my hand or pray with me, as long as this journey would be launched. So this is how Rania (from Nazareth), Jesura (Jerusalem), Tian Jie (China) and Hermana (Migdal) joined and formed the team.

We started working on the details. We knew there aren’t any specific locations mentioned in the book of Ruth, besides the fields of Moab and the final destination – Beit Lehem. Checking what the Bible teaches about the region, it became clear that we have to include Jacob’s journey to Canaan on his way back from Laban. Thus we added Gilead, the passage of Jabok and Peniel to our list.

Mount Nebo, Aman, Medaba, Tishbi – these too were must see locations. Petra? Na, not on this trip, we decided.

A map of Israel and Jordan with which we made our plans.

In black are the Biblical names of the sites; red is the modern ones.

It took a few weeks to figure out the dates. Priscilla was to fly in from TX, Tian Jie from China. Finally the trip was settled for May 15-22.

“We are in a God moment”, said Priscilla, and everyone involved understood this.

This journey was so deep and multi layered, that it will take a few posts to cover. I don’t really think I can cover it all, but I will certainly try to share with you some of the depth of this experience, and the meaningful change it brings into my life.

In the meantime, I continue with the usual ministry: teaching, ministering in small groups, planning another Tabernacle Seminar to English speaking tourists, working with holocaust survivors, etc.

This Monday I will join the youth ministry of Streams in the Desert, who work among broken families in the southern region of Israel. About 50 teenagers (most of them from Messianic homes, although not all are born again. Majority come from broken homes) will attend a 4 days’ camp, where I will be teaching the team and kids to forgive.

The title this year is “Secret Weapon”. The program includes a lot of fun, but also two short slots for teaching each day. I am not just going to teach it, but hopefully equip them with this Secret Weapon. We want them to see how God uses suffering to mold us, and that their battles are a language that carries a spiritual message from the Throne Room. We pray that they will be doers, not just hearers. That they will choose to repent and forgive, versus remain victims of someone else’s choices.

Before the kids arrive on Wednesday I will have two days with the team, and in between all the many preparations each one of them has to do, I will train the (almost 40!!!) team members to use this great weapon, so they can testify later to the kids about the breakthroughs they saw once they chose to forgive.

We have a great prayer support throughout this program. There will be at least 10 intercessors with us, praying over every child and team member, every detail and need. This is my 3rd year with this youth camp, and I have seen the clear difference the prayer team creates. I am excited to see God’s hand again moving before our own eyes.

More about their ministry and the coming camp: