“Seriously? Roses? Don’t you think it would be a waste? They will throw them away a minute later.” This was my brimming-with-faith response to Rania, who just shared with me something she believed God had put on her heart.

She was in the middle of a 40-day fast when God reminded her of a dream she had years ago. It was about a love revolution, where Jews and Arabs hand out roses instead of hatred, war, bullets and guns. Roses as a symbol of love for one another. “What will happen,” she wondered over the phone, “if in each city in Israel people were to do this act of kindness and love?”

Thank God, my bucket of cold water did not go too far. Rania took this reminder from God seriously, and moved fast. She had a logo made, hats and stickers printed, and 300 gorgeous red roses filling up her small car.

On December 13th, nine women – both Jewish and Arab – carried these roses up the stairs to Jaffa gate in Jerusalem.

I was not prepared for the strong reactions. At times I thought: “Come on, this is just a rose. Take it and throw it away, if you don’t want it. Why make such an issue out of it?” The passers by reacted to it so strongly. It was as if each rose opened a door into their hearts, and pulled out something that usually would take a good 30 minutes of talking to get to. Those roses were prayed over, and they carried with them a message from God.

That Thursday ended a bloody week altogether, with some severe terror attacks across the land. So our message – “We are in this together, there is another way!” – had an even deeper significance.

Later we moved to the Salah e-Din neighborhood in the city, which is populated mostly by Arabs. We walked around in pairs – one Jewish woman and one Arab woman, and felt safe, excited, on a mission.

Most roses were received with joy! On Salah e-Din street we even caused a traffic jam as cars pulled aside to take a rose.

We handed out 300 roses, and I can share with you at least 250 stories that will make you smile or fill your heart with prayer. Don’t worry, I am not gonna do that. But here are a few of the best.

One of the girls shared: “We handed our last rose to an Arab woman and told her in Arabic about the only Love that can bridge the gap between Jews and Arabs. She was so surprised and asked if I really am Jewish. When I said, ‘Yes’, she asked us to repeat everything we previously shared, only this time in Hebrew. She listened carefully and was touched to tears. Apparently, she has been waiting for years to hear this message from an Israeli Jewess. We departed with a hug, and with much hope.” 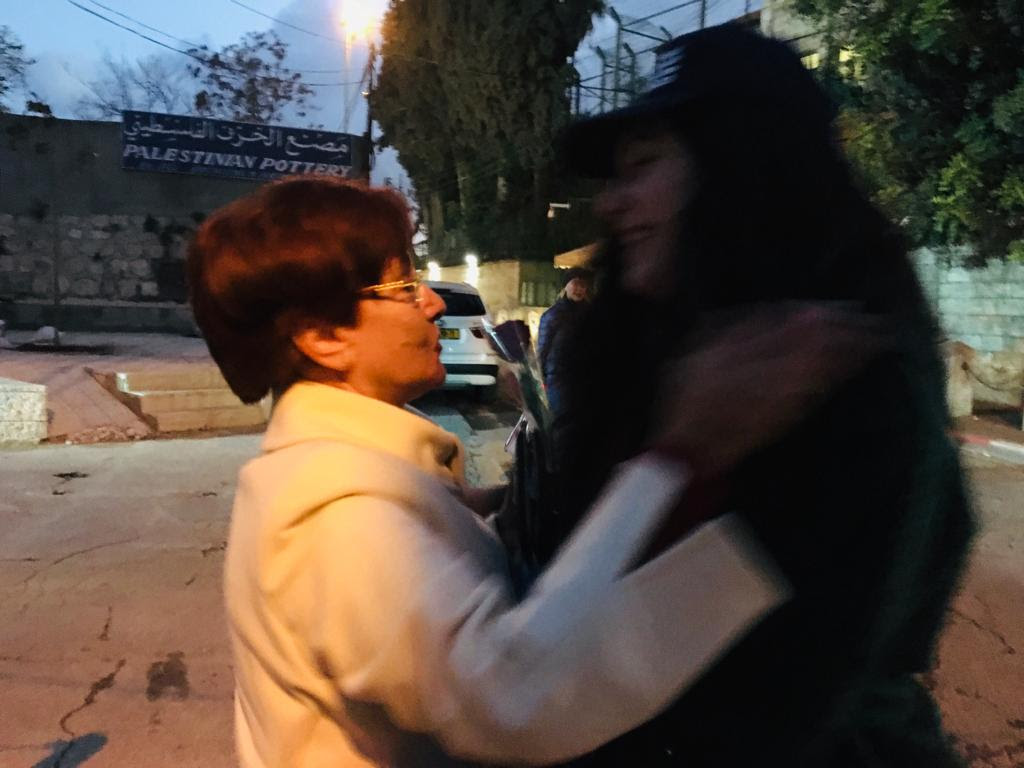 Another girl on our team, Sarah, shared later: “One of our first encounters was with two Jewish women who were so excited, they immediately said, ‘Oh, we don’t need a rose, keep it for others, we just want to hug you!’

“One man said he didn’t want a rose, but he did want to donate towards our revolution! He kept asking where and how he can give. We explained simply that it’s like the love of God, it comes as a free gift and that he just has to receive it.

A Muslim lady from the old city was so touched by the rose.
Her eyes filled with tears as we explained what is in our hearts towards her

“One lady lit up at the sight of the roses. ‘You have no idea what this means to me,’ she exclaimed. ‘This must be God speaking! He always speaks to me through roses!’ She is apparently going through the process of conversion to Judaism, and she had a big decision to make, but she was not sure what to do (we wondered if it involved the denial of Yeshua, something they usually ask you to do in that process). I (Sarah) told her, ‘Yes, this is God speaking to you! It’s no coincidence that you came here and received this rose. It’s because He loves you and wants to speak to you.’

“I prayed for her for wisdom and ended with ‘in Yeshua’s name.’ She was so touched, and said that our hearts are in the right place.

“However, the simple step of offering a free rose was instantly opposed by some. One Orthodox couple became angry when they heard our story (we didn’t even make it to the Gospel or to talking about God). They live along the Gaza border, and the wife is a principal of a local high school. She was adamant that it’s impossible to love when there’s so much pain, rockets being fired, children growing up in trauma. So she refused to take the rose. Interestingly, the husband confessed later that if his wife was not with him, he would have taken one.”

“Can I Have One More Please?”

Mohammed (a Muslim) is about 7 years old. Rania was parking her car when he approached her and said: “Auntie, can I please have one rose?”

He then asked for another one, “for my mom.” Rania explained to him why she was handing out roses and that the love of Jesus is the reason behind it. This piqued his interest, so Mohammed wanted to know more about this Jesus and where He lives.

“In heaven,” Rania explained, “and He loves you so much.” Mohammed was intrigued because he thought no one lives in heaven.

Rania explained how Jesus died and was resurrected, since God never dies. Eman (one of the Arab ladies on our team) asked Mohammed: “What do you need from Jesus today?”

Mohammed explained with a sad face: “We need everything because we have nothing in our home. I don’t even have money to take the bus back to my mom.”

Everyone’s heart melted and tears started rolling. Rania gave him some money for the bus, and they both laid hands on him and began praying. When they finished, Mohammed said that he has pain in his feet. Rania began to lead him in a prayer of healing, and asked him to repeat after her. Finally she declared over him: “You can walk now.”

Mohammed began to walk and tap his feet on the ground, and then looked at Rania with eyes full of shock. No more pain! You can imagine his excitement! 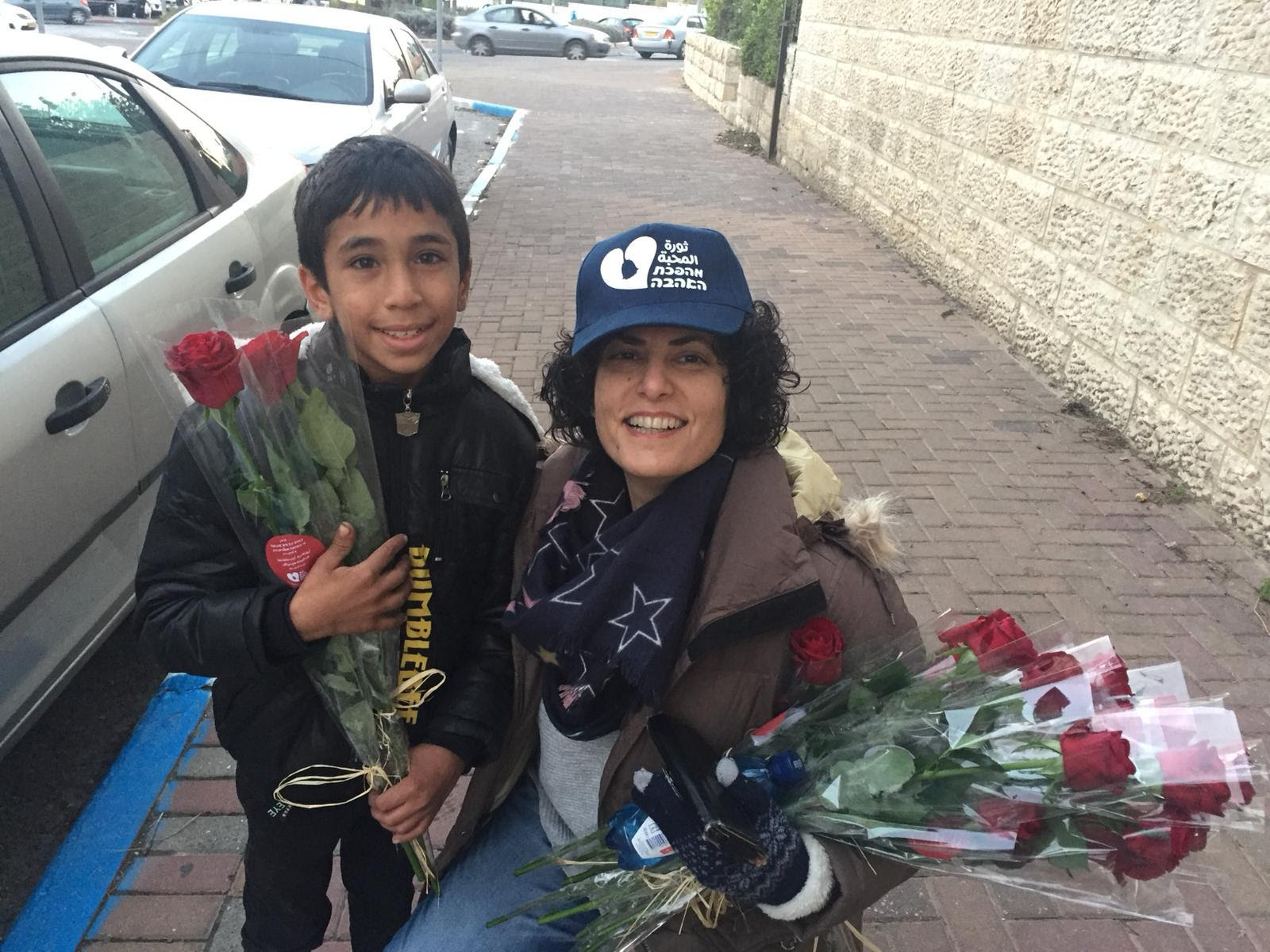 Rania with Mohammed, who is holding on to his dear two roses

“Tell your mom what happened today,” Rania said. “Tell her that you met a woman who gave you two roses, and that Jesus Christ can provide every single need in your home. You can pray to Him and he will answer your prayers, just as He did this moment because He loves you.”

She also gave him some homework for that night: “Ask Jesus to come and visit you in the night and show Himself to you.”

In November 2003 the world watched with amazement: thousands of soldiers were ordered to aim their guns towards protests, who were marching through the streets of Tbilisi, the capital of Georgia. They were protesting against a corrupt regime and the invalidation of their human rights.

Everyone expected things to escalate, but no shot was made and the police exercised no force. How come?

The protesters were armed with… yes, roses. The guns lost their power in sight of these roses. And most important: the corrupt regime was replaced. Turns out roses can have real power to change things from the core.

15 thoughts on “The Love Revolution”