Armenia! The gorgeous mountains. The sweetness and earth-like taste of its fruit and vegetables. Armenia does not have many natural resources, but it can pride in its soil and water. Clean and rich, which is why its harvest is soooo tasty. 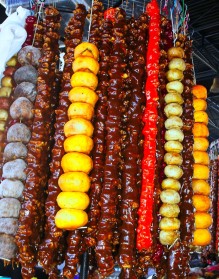 Most fruit are dried in a natural process,
with no preservatives or chemicals. They are huge and so sweeeet

I have a feeling it affects the people who grow up on that same soil. They are sweet and well connected to the soil, the ground. The Armenians I met have a noticeable depth and their hunger for God is tangible. A few months ago God graciously breathed new hope into them, as a result of what they call “The Velvet Revolution.” I will let Wikipedia fill you in on the interesting details [https://en.wikipedia.org/wiki/2018_Armenian_Velvet_Revolution; or http://euromaidanpress.com/2018/05/10/armenias-velvet-revolution-told-by-armenians/]. Bottom line: the entire nation marched to the streets for a whole month, and brought a radical change with zero casualties! That in itself tells a lot about their make up as a nation.

I was invited there to hold a Tabernacle Seminar for 70 leaders of “Young Life clubs,” who minister to teenagers throughout the former Soviet Union. These young adults are so sincere and tender. I was impressed with the way they embrace truth wholeheartedly. I loved giving them what God had given me, and seeing many of them apply it right there and than.

My general impression was that their knowledge of God’s plan for Israel and the nations is in its diapers. But quite a few of them mentioned that now, having met a Hebrew lady who believes in Yeshua, they want to hear and learn more about us. They keep corresponding with me, asking to learn about our traditions and culture.

While praying in one of the churches in Armenia, I saw in my spirit’s eyes a huge rainbow stretching from Mt. Ararat (Armenia) all the way to Israel. On its green arc a ram was walking from Armenia towards Israel. A figure (not sure if it was one person or a few) was following it. On the blue arc I saw a few figures leaping joyfully from Israel towards Armenia.

It looked like a bridge that needs to be built between these two nations. Armenia has gone through a cruel genocide (1915-1918), initiated by the Ottoman Turks. Three years ago they needed Israel to vote for recognition of that genocide, but sadly, we did not stand with them for various reasons. This opened a wound that requires repentance and forgiveness. It felt to me like the Armenians are ready to extend it. They hurt, but somehow it did not evolve into bitterness. They are stretching out open arms, so I pray that our politicians will wisely choose Armenia as an ally, and even establish diplomatic relations with them. I pray too that God will reveal to the Armenian church His heart for Israel, and His end time plan for them as well. They need it! We need it!

This weekend I met in Nazareth with a group of Arab young adults. Once worship started, it took them just seconds to deeply engage and enjoy God. I was moved!

I came there to teach about the Biblical feasts. I chose to do that through the angle of God’s hidden Faces. It is important to understand that God had set in His calendar many opportunities for us to meet Him. As if He pulled out His calendar, and marked regular dates for us to deepen our intimacy with Him, go on a date and enjoy each other – once a week, once a month, and at least seven more times during a regular year. They are even called “meetings, dates.” The Hebrew word translated into “Feasts” is “Moed,” meaning – a meeting. But through the years we distorted the calendar, forgot the original purpose of each one and turned it mostly into a gastronomic celebration.

Those Arab young adults are surrounded by Jewish culture, but they don’t necessarily understand it. Rania, their leader, meets with them weekly and teaches them about the importance of blessing Israel and praying for her. For some of them, hearing about the Hidden Angel of God’s Faces helped them understand a huge enigma.

One guy commented that he never realized how much he misses by not reading the Bible in Hebrew (a language he knows). “I would really like to start doing it,” he said. I also saw in some of them a sense of relief, realizing the Jewish nation is still under a punishment, which might explain some of our ignorance and hostility towards them. Others loved hearing that they have such a crucial part in the story. That we need them! That God needs them!

After meeting them, and with the deep feelings stirred within me in Armenia, I can clearly say: The Middle Eastern Ruth is waking up. And she is being prepared to take her part in the story, her redeemed and righteous place.

How Can you Pray?

4 thoughts on “A Rainbow, a Bridge and a Genocide”