The fate of children who survived the holocaust as a result of being hidden in the homes of Christian families or in monasteries is a gloomy issue in Jewish history. The Catholic church did not provide much help after the holocaust to provide a solution to this problem, neither did the person at its helm, pope Pius XII.

Thousands of Jewish children were hidden during the holocaust in monasteries, with Catholic families, schools and so forth. Many were baptized, leading the church to prevent their return to their families and former religion. Others were adopted during the war by Polish families, and thus were lost to Israel forever. It is estimated that over 3,000 Jewish children were hid in monasteries in Poland after the holocaust. 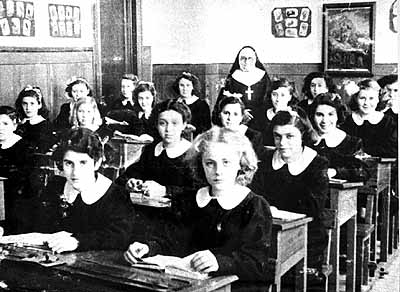 Among the requests of Jewish leaders to save the “monastery children” after the holocaust, one of the most well known is that of the Rabbi Yitzhak HaLevi Herzog in 1946, while he was Israel’s chief Rabbi. Immediately after the Holocaust, Herzog traveled for six month among the destructed and desolate Jewish communities of Europe. His visit began at the Vatican, in an attempt to assist Jews and locate the many Jewish children that were hidden in Catholic convents.

Rabbi Herzog pled with the pope stating that “The Jewish people can not accept that these youngsters will remain completely and utterly detached from their heritage. As of today, each Jewish child is to us like a thousand children.” He beseeched the pope’s assistance in their return, and demanded that priests in every county be told that they are to reveal the monasteries where these children were hidden so that they can be returned to their own people. The pope refused with various excuses, but did grant Herzogpermission to visit the monasteries himself, and look for the kids. If he could prove that any of them was of Jewish descent, he was allowed to take them with him.

As there was no way to locate the children, Rabbi Herzog would enter a Monastery boarding school at night, stand in the middle of the room and yell. “Sh’ma Israel, Adonai Eloheynu, Adonai Echad” (Hear, O Israel, the LORD our God, the LORD is one). All of a sudden, some children would rise from their bed, and half asleep would cry out: “Mamme, Mamme!” Others had their little right hand rise to cover their eyes, which obviously testified to their Jewishness. The Catholic priests who witnessed it did not protest, and allowed Herzog to take these kids with him to Israel. In such an uncommon way he was able to bring back approximately 1,000 children to our people.

I am so touched by the memory that was burned in these children’s minds. They were mere infants when their parents, who were murdered in the Nazi camps, handed them to the monks. These kids were raised as Catholics and knew nothing of their Jewish heritage. But when they heard that cry in the middle of the night, something deep inside them was stirred to life, something that led them back home.

This amazing story illustrates what is happening to the people of Israel in these last days. God is walking in our midst, often times through Gentiles who love us, and contrary to all we have perceived for two thousand years, contrary to the mindset which says that belief in Yeshua means belief in foreign gods, they teach us that He is our Messiah. The cry “Sh’ma Israel, Adonai Eloheynu, Adonai Echad” is heard, and is stirring something within us, waking us up from centuries of slumber.

“Tatte, Tatte!” we start to cry out. “Father, Father.” And He reveals His faces to us, and leads us to the climax of the story, to the day in which all His children will return from various monasteries and from far away places, back to their homeland, where He will hide His faces from us no more (Ezk. 39:22-29).