A report published this week, as Holocaust Memorial Day is fast approaching, calls the Israeli authorities to act immediately in order to correct the injustice inflicted upon them: “Time is running out. The state should continue to make improvements and strive to solve the existential distress of all the needy elderly in the country, including Holocaust survivors. The survivors who experienced the events of the Holocaust are entitled to live the rest of their lives with dignity and to receive the recognition they deserve.” This is what Israel’s state comptroller writes in his special report.

It is shameful. We are called to remember these people, and this is the meaning of the word “Yizkor”. I am constantly amazed at the way these survivors chose life, although at times, death could have been a much easier solution. I try to put myself in their place. If I was being shut behind fences, starved and abused, I think I would have chosen to put an end to it as soon as possible. I may not have taken my life by my own hands, but I probably would have tried to escape, knowing that most likely someone will shoot me and end my life. Anything to make that suffering end. But something burned in the hearts of these survivors, and they chose life. Sanctity of life, knowing that life is a gift only given to us once, was stronger than all the unfathomable suffering they had experienced.

We need to remember them, and we even hold an annual commemoration day in their honor, but throughout the year, not enough is done to improve their state. 40 million Israeli Shekels were allocated for the benefit of holocaust survivors in 2016, but only 4.3 million were used. Red tape. Part of their needs are not met in any government office, while others are handled by several authorities simultaneously. This inefficiency, apathy and irritating waste should summon us all to pray and intercede for them.

So please, as Holocaust Memorial Day will be commemorated this coming Sunday and Monday, and regardless of the timing, let us lift the widowhood of Israel in this area before the Throne of Grace. Let this embarrassing realm be adorned with the glory of God. Pray for the various authorities that are supposed to make life easier and better for these precious souls. Pray that the hearts of the officials serving them will soften, and that treatment of their needs will rise to the top of the list of priorities, so that they can live the few years they still have with dignity.

We, at Ot OoMofet, are doing our little part to improve the state of those we can through personally assisting one widow at a time, one family here and there, as God leads us to them. Here are a few pictures that I hope will warm your heart and birth hope in all of us. 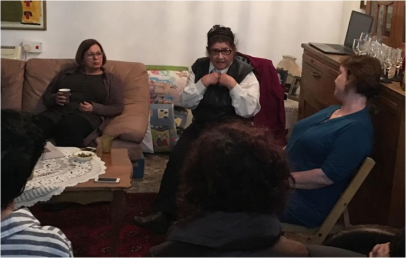 Rivka Shechman is an 87 year old Holocaust survivor, and a talented and artistic woman. Her book of poems and artwork was finally published by us in both Hebrew and English. We invited a few friends, and held a special night celebrating this publishing. Rivka read from her works, and was touched to tears as people she never met before, people who did not know her, took the time to listen to her and even purchase a copy of her book. (For your very own copy, please go to He is Always With Me).

Makombo, a loyal partner of Ot Oo’Mofet from Kenya, fell in love with Rivka’s story. She ordered several copies of her book, and taught the children under her care to recite her poems. She is using Rivka’s book of poems as a textbook to teach the kids about the Holocaust, in a culture that has no idea about the existence of that atrocity in the history of the world.

I wish you could all see the look on Rivka’s face when she realized her life story has become a testimony to others. It gave so much meaning to her suffering, and brought a huge smile to her face.

A group of friends from Georgia and Florida boarded a plane and arrived in Israel for a week of hands-on ministry, among else painting Rivka’s home, that desperately needed some fixings and cleaning. She was beside herself in excitement and joy! 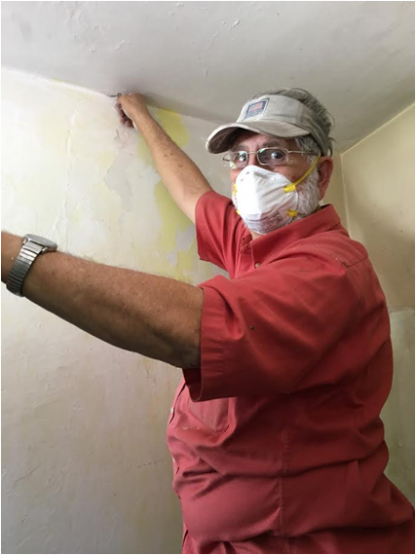 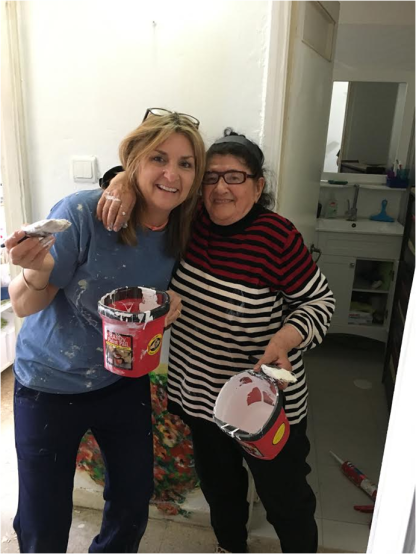 These are just a few of the ways God is using to soften Jewish broken hearts who have hardened towards Him. They find it hard to address Him directly, just as Naomi found it difficult to address Boaz directly. She needed a mediator, and God is supplying nowadays this mediator, this go between, through Ruths such as you, who give of their time or resources, or come to Israel in person to say: “Your people shall be my people, and your God shall be your God; Your pain is my pain, and as much as I possible can – I will take some of that pain away from you and show you the love of our Heavenly Father.”

Rivka’s sons, who are used to a life of sparseness, are amazed to see the change in their mother’s spirit and attitude. She is happy, excited, full of joy. Her home is being changed right in front of their eyes, and needs they were unable to help her meet in years are being met. They seek to understand what is going on, and why, and so they too get to hear about the God of Israel who bestows His love for his people through the Gentiles. 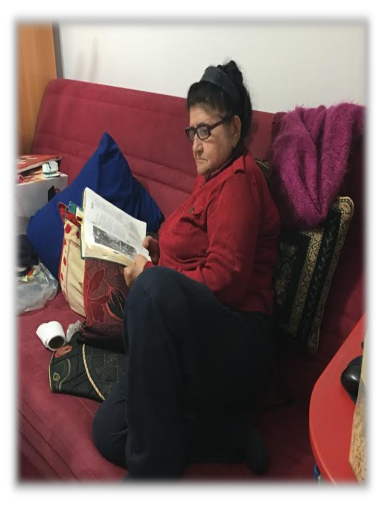 Kirby, one of the women in the group, showed Rivka her Bible,
which is accompanied by illustration done by Michael Washer.
She got comfy on her couch while the team worked on her walls,
and for the first time since I met her a few years ago,
looked through a Bible and was vastly impressed.

5 thoughts on “Yizkor the Forgotten”